What is Pho? Where does it come from? What's inside? Learn all about pho below as we take you on a journey.

In Vietnam, pho is more than just a soup served in households, street stalls, and restaurants countrywide. It holds a special place in the country’s cultural identity.

Considered the most famous national dish of Vietnam, pho at its most basic consists of a clear beef- or chicken-based broth, rice noodles, herbs, and thinly sliced meats. It may also be served with bean sprouts, fresh herbs, limes or lemons, chiles, and other garnishes. 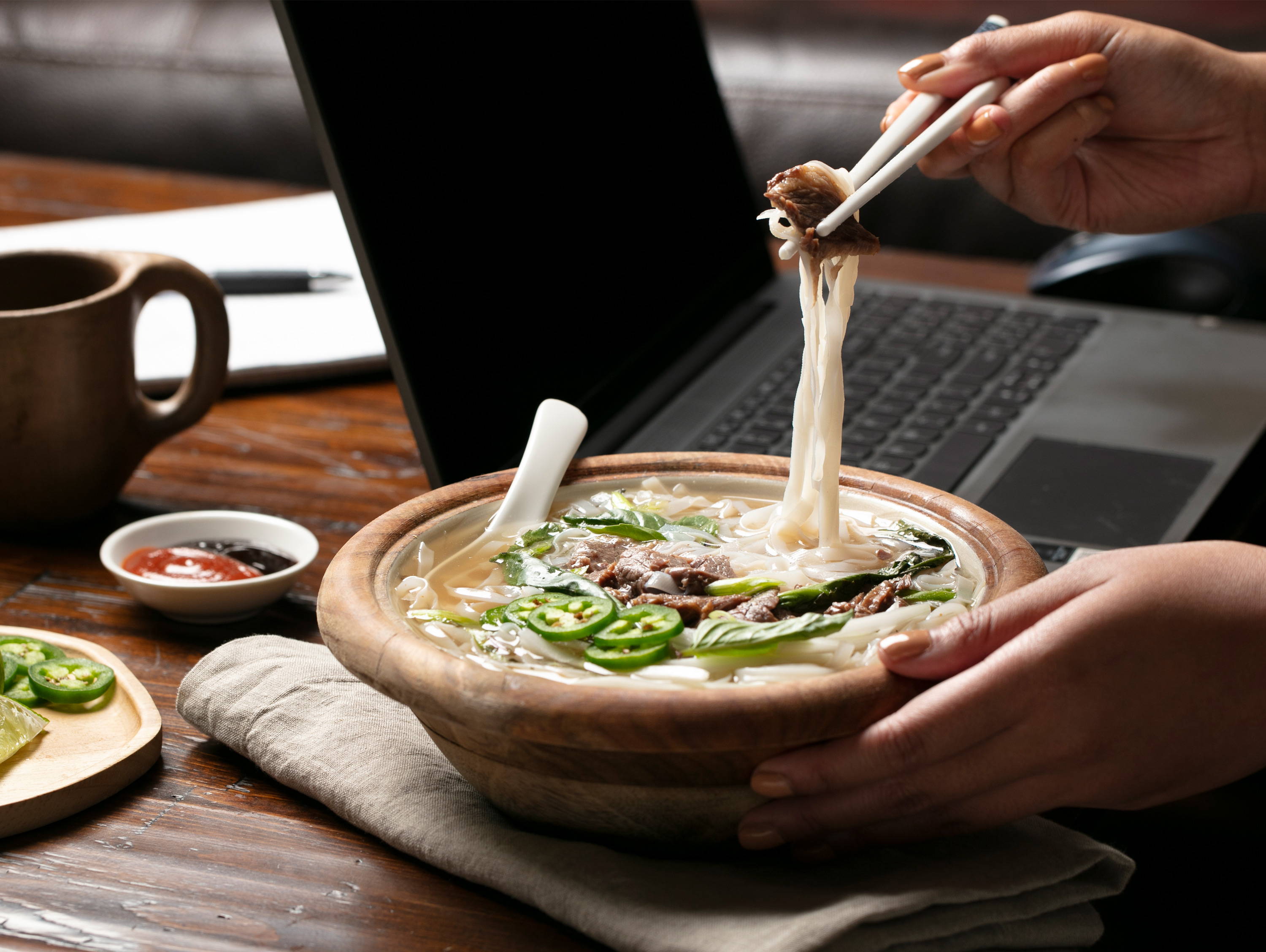 Broth made from animal bones can help build strength in your own bones. It’s also a great source of other minerals and vitamins that keep your body functioning to the best of its ability.

Many pho recipes are teeming with nutrient-packed herbs and veggies and typically include some sort of meat that is rich in protein. It is gluten-free as it uses rice noodles. Benefits aside, you shouldn’t overdo it. 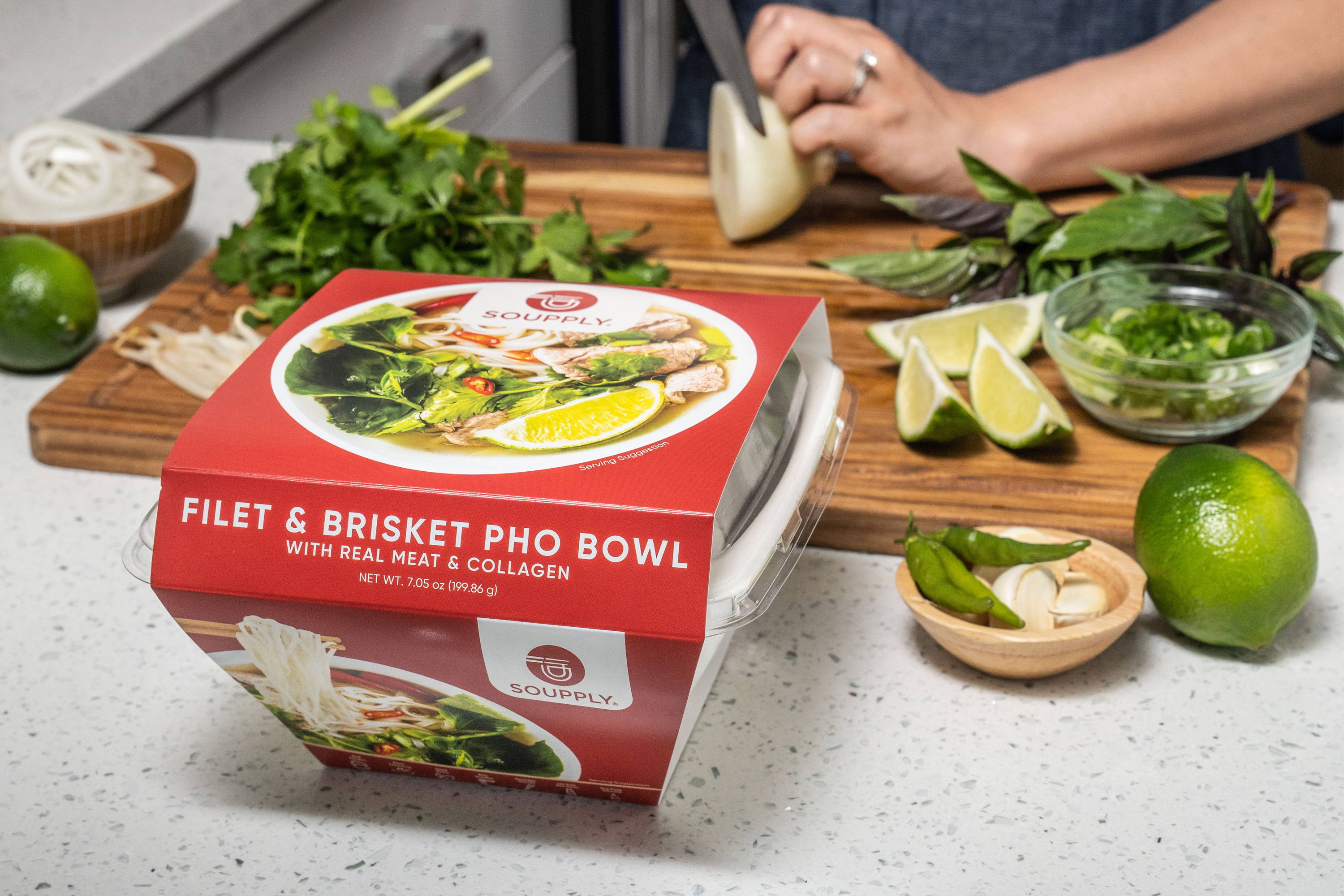 It is believed that pho surfaced in northern Vietnam during the French colonization of Hanoi in the mid to late 1880s, suggesting that it could be a Vietnamese rendition of the French beef stew soup pot-au-feu. Many Hanoians explain that the word pho derives from French soldiers' ordering "feu" (fire), referring to both the steam rising from a bowl of pho and the wood fire seen glowing in the evening.

Up until that point, the Vietnamese ate very little red meat. The French’s appetite changed things and red meat slowly started making its way into the city’s markets and kitchens. As bits were carved off the bones to satisfy the upper classes’ newfound taste buds, cooks started simmering the leftover oxtail and shinbones to create a clear consommé. Influenced by the cooking style of the French, they added charred onions to this nourishing broth and served it with slices of raw and cooked beef.

The French were not the only ones to make their mark. The introduction of ingredients such as rice noodles, ginger, and anise came from Vietnam’s neighbors in the north. Fusing together these foreign influences, the Vietnamese added their own fish sauce (nước chấm) and created something wholly unique and native.

Reviews of Vietnamese literature have found that pho entered the mainstream sometime in the 1910s. The traditional home of pho is reputed to be in Nam Định Province, southeast of Hanoi. Originally, pho was often sold at dawn and dusk by wandering street vendors who would shoulder mobile kitchens on carrying poles. Today, pho stalls spill out across the sidewalk of nearly every street in Hanoi.

After the division of the country in 1954, the traditionally northern recipe migrated south to Saigon, when the country was split in two and nearly a million Vietnamese moved south to escape the communist north. Once pho hit the streets of Saigon, it morphed. It became customizable with sauces and herbs. No longer confined to northern culinary traditions, variations in meat and broth appeared, and additional garnishes such as lime, bean sprouts, cilantro, basil, hoisin sauce, and hot chili sauce became standard.

Pho — especially the Southern style — gained popularity around the world after the fall of Saigon in 1975, as hundreds of thousands of Vietnamese refugees fled their country taking with them their hopes and dreams of a better life. They also brought their cultures and cuisine and introduced it to other countries, of which pho has become the most popular among Americans.

In 1980, the first of hundreds of pho restaurants opened in the Little Saigon in Orange County, California. Pho began to enter the mainstream during the 1990s, as relations between the U.S. and Vietnam improved. Today there are almost 2,000 pho restaurants spread across the United States in Texas, California, and the East Coast as well as Canada.

The word "pho" was added to the Shorter Oxford English Dictionary in 2007. Pho is listed at number 28 on "World's 50 most delicious foods" compiled by CNN Go in 2011. It has been adopted by other Southeast Asian cuisines, including Lao and Hmong cuisine. 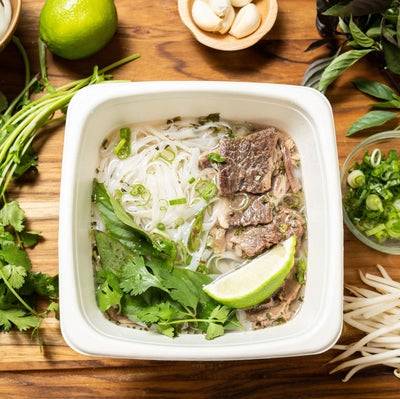 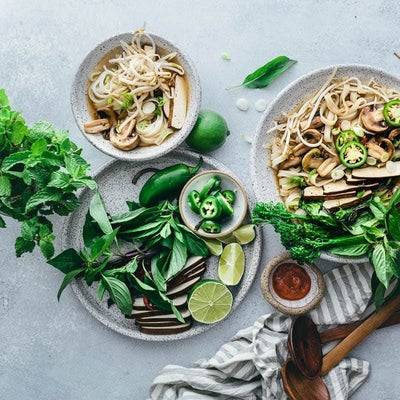 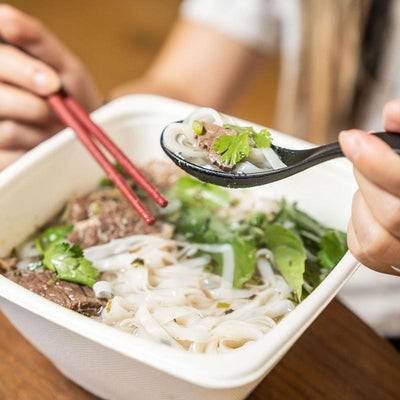 Pho is served in a bowl with rice noodles in clear beef broth, with thin cuts of beef (steak, fatty flank, lean flank, brisket). Variations feature slow-cooked tendon, tripe, or meatballs. Chicken pho is made using the same spices as beef, but the broth is made using chicken bones and meat.

The thick dried rice noodle that is usually used is called bánh phở, but some versions may be made with bánh phở tươi (fresh pho noodles). The pho noodles are usually medium-width. However, people from different regions of Vietnam will prefer different widths.

The soup for beef pho is generally made by simmering beef bones, oxtails, flank steak, and spices. The spices, wrapped in cheesecloth or a soaking bag, usually contain cloves, star anise, coriander seed, fennel seed, Saigon cinnamon, and black cardamom. Onion and ginger are often charred over an open fire for about a minute before adding them to the stock to bring out their full flavor. Charred ginger can be omitted since its function in beef pho is to subdue the strong smell of beef.

For a more intense flavor, the bones may still have beef on them. Chicken bones also produce a similar broth, which takes several hours to make. Impurities that float to the top while cooking are often skimmed; this is the key to a clear broth. Nước mắm (fish sauce) is added toward the end.

Vietnamese dishes are typically served with many greens, herbs, vegetables, and various other accompaniments, such as dipping sauces, spicy chili sauces such as sriracha, and hoisin sauce. The dish is garnished with ingredients such as green onions, white onions, Thai basil, fresh Thai chili peppers or jalapeño, lemon or lime wedges, bean sprouts, cilantro (coriander leaves), or culantro.

Several ingredients not generally served with pho may be ordered by request. Extra-fatty broth (nước béo) can be ordered and comes with scallions to sweeten it. A popular side dish ordered upon request is hành dấm, or vinegared white onions. 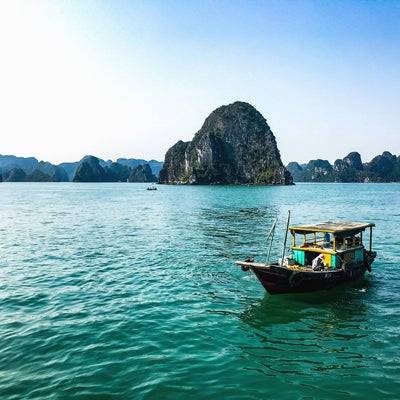 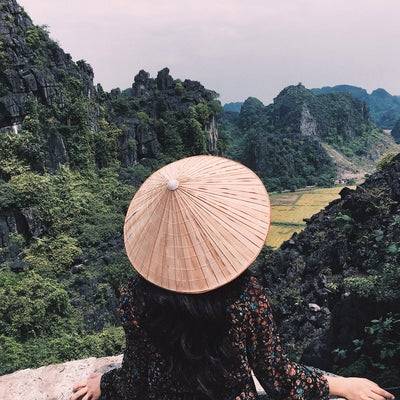 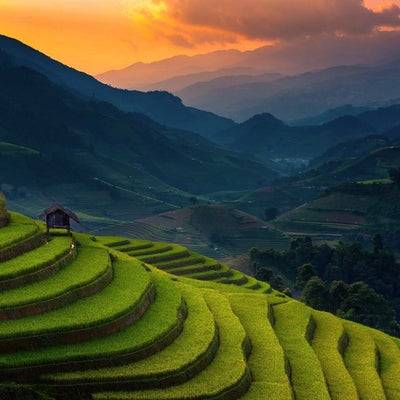 The Hanoi (northern) and Saigon (southern) pho styles differ by noodle width, sweetness of broth, and choice of herbs.

Considered the original pho, pho bac is northern Vietnamese pho. It's known for its more mild, clear, fatty bone broth, wider noodles, and blanched whole green onions. Garnishes offered generally include only diced green onion, cilantro, garlic, green chilis, lime, chili sauce, small slices of ginger laid on top, and quẩy (Chinese donut). The pho is served without bean sprouts or herbs. It usually has simple chicken or fewer cuts of thinly sliced raw beef. The lack of side garnishes is typical of northern Vietnamese-style cooking. Northern style pho tends to be simpler and is made with fewer ingredients.

The popularity of pho spread southwards starting in 1954 when the country was divided into North and South Vietnam as millions migrated south during this period of change to avoid communism. As the comforting dish moved south, pho took on a new form with additional ingredients until it evolved into the version that is commonly served today. Southern-style pho, pho nam, is a complex dish made from a dozen ingredients and is known for its bolder, clearer broth and thinner noodles. In the south, meat variation plays a larger role in pho, where it's common to utilize many parts of the beef including bone borrow, tendon, and brisket in addition to meatballs. It's typically topped with bean sprouts, tương ớt (sriracha or chili sauce), tương đen (hoisin sauce), and a greater variety of fresh herbs such as ngò gai (sawleaf), cilantro, and húng quế (Thai basil). As with the Northern style pho, fresh sliced chilies and lime are used as condiments.